Dance Theater Aboard the Pequod, the Flat Earth Movement, and Climate Inaction 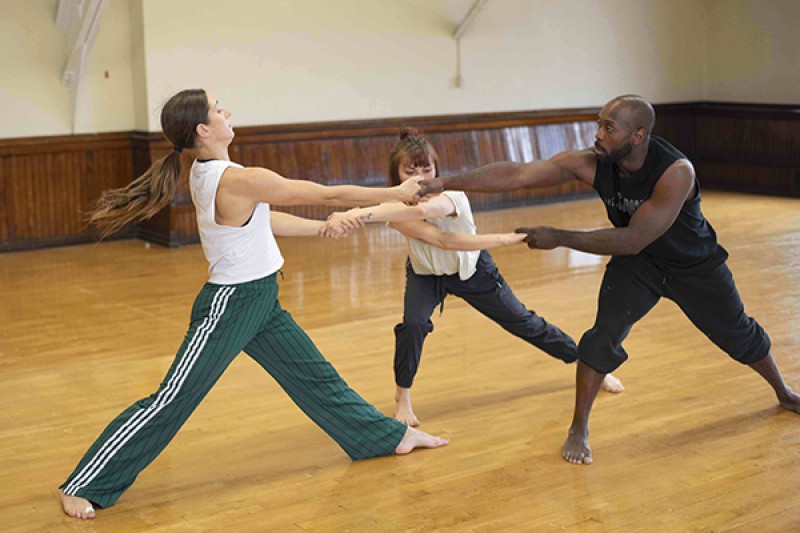 I’m building a dance to curb emissions. If that seems unlikely, well then at least to curb passivity, or worse yet, conspiratorial thinking about our climate crisis. In a few weeks at the Wisconsin Union Theater, The Seldoms will premiere Floe, a new multimedia performance piece about climate change. The ensemble, our collaborators, and I have spent two years conceptualizing, researching, and building this project. Two years, to what end? Can dance, or dance-theater, or art of any type actually effect change on an issue as big, complex, and scary as global warming and climate instability? We hope so. We hope to. 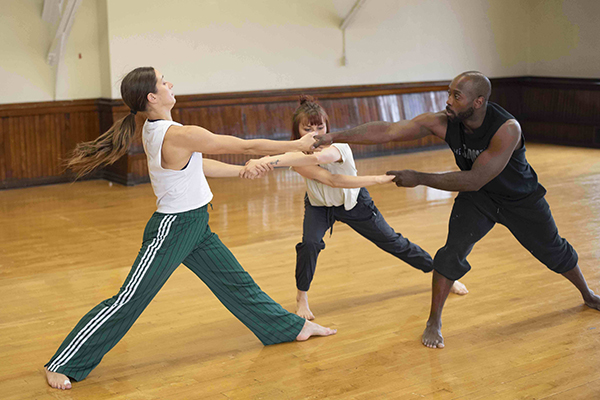 The Seldoms rehearse FLOE. Photo by A. Deran Photography.

HOPE. I’ve been listening to different voices opine on the notion of “hope” in relation to climate change. Some say that hope is not only not useful here, but dangerous, and that instead a kind of righteous anger is needed. Climate scientist Kate Marvel writes, “Hope is the knowledge that we can prevent bad things, and the realization that we might choose not to.” As an artist, as a maker of performances and experiences, I might be charged with leading an audience toward a feeling of hope or of righteous anger, or spur them to action, but mostly I make art that grapples with the murkiness of our messy world. My dance works, while never ambivalent in physicality, do express a kind of ambiguity. Ambiguous because we stage questions not answers, we embody a problem-solving, effortful body, and in this case, within the intractable problem of climate instability and fossil fuel addiction. Hope is not on the surface of this dance work.

[W]e stage questions not answers, we embody a problem-solving, effortful body, and in this case, within the intractable problem of climate instability and fossil fuel addiction.

What does a dance say to science?  We haven’t made a dance about science per se, but about our relationship to science, which is to say our relationship to evidence, consensus, knowledge, indeed, to each other. In Floe, we navigate this sticky topic by weaving together multiple references to modern delusions: the theories of flat earth conspirators, contemporary climate change denialists, and the ill-fated whalers of Melville’s Moby Dick. The performers at times reference Ishmael, Ahab, Starbuck, locating in these iconic forms the theme of man’s adversarial relationship to nature, domination and conquest. One chapter of Moby Dick, “The Monkey Rope”, inspired a choreographic motif: like whalers Queequeg and Ishmael tied fast together by a rope at the waist, the dancers link arms and legs and pass through a series of knotting and unknotting actions, suggesting the interconnectivity of all of us within this climate crisis. Floe centers around a portrayal of the Earth itself -- ice, water, and land -- and our interwoven humanity — the people making our planet less hospitable, the people victimized by a changing earth — in short, all of us. Hope is not on the surface of this dance work, but it may be within it. 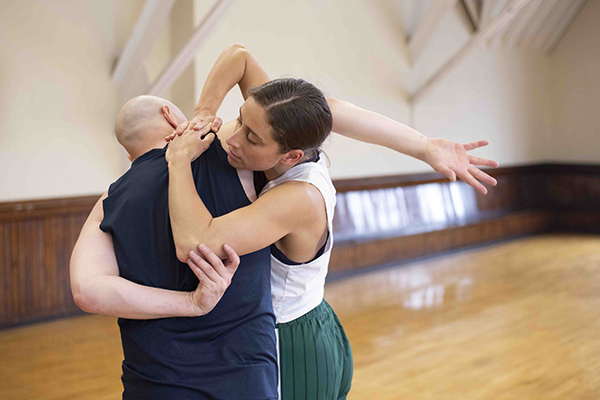 Dancers rehearse knotting and unknotting. Photo by A. Deran Photography.

As part of our research for Floe, the ensemble and I traveled to Houston to hear stories of Hurricane Harvey and the unprecedented rainfall and flooding. In listening to accounts of civilian rescuers and flood victims, I was struck by a shared sentiment that emerged: the body itself is the center of gravity of this human-made crisis. In these disastrous weather events exacerbated by climate change, the experience is located essentially and acutely at the level of body: survivors vividly recall the physical exertion and trauma—paddling for hours to make rescues, pulling down flood-damaged dry wall, and over a year later, still being triggered, physically agitated by the sound of rain. As a specialized kind of embodied knowledge, dance can reveal to the audience the deep effects of a situation on a body. The audience can read the shape of a spine, a posture that is defeated or triumphant, indifferent or watchful, obsessive and self-involved or generous and supportive. In building Floe, we hope, we believe that the articulate, expressive body is a powerful means to convey what is at stake in our warming world, and is a way to understand our culpability, fragility, and mandate.

In those Houston interviews, we heard various perspectives for the city's future—about resilience and adaptation in a new normal where Harvey is the baseline for storms, and of larger visions for a redefined relationship between Houston's people and nature. From those very bodies who paddled the flood and retain memories of the overwhelming power of water came an impulse of strength, resolve, and hope.

I’ll close by sharing these words from Margaret, one of our interviewees, whose home was completely flooded.

The world premiere of Floe is January 22-24. The piece is curated so that patrons move between halls (Shannon Hall and the Play Circle) for a truly unique and immersive experience. Learn more and purchase tickets here.