Original art pieces have debuted above waste bins at Union South with the goal of improving visitors’ waste disposal practices. 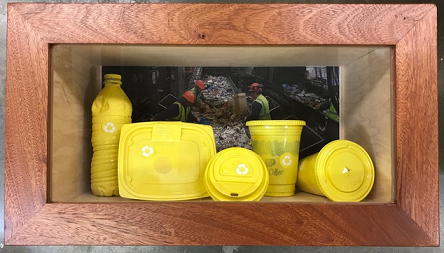 The art pieces are the result of a collaborative effort among the Wisconsin Union and the University of Wisconsin-Madison Department of Life Sciences Communication (LSC), Office of Sustainability and Art Department.

The innovative effort began with a research project for LSC 515 “Public Information Campaigns and Programs”, a class taught in fall 2016 by Bret Shaw, environmental communication specialist for UW-Extension and an LSC associate professor.

“Through our research, we found that people are confused about which items can and cannot by recycled or composted,” said Samuel Adam Marquardt, a UW-Madison alumnus and student researcher who took part in the project. “For example, many people didn’t know that the to-go boxes at Ginger Root are compostable.”

The UW-Madison students’ research determined that Union South members and guests care about properly disposing of waste and feel that they are correctly sorting their disposable items among Union South’s trash, recycling and compost bins. However, their research also proved the need for education about sorting waste to prevent contamination of Union South’s waste stream.

A waste stream is defined as the lifecycle of waste from the time of generation to its final disposal, which could include but is not limited to being recycled into new materials or being discarded at landfills.

When a waste stream of a particular type is contaminated—too much trash in the compost, for example—it cannot be processed properly and goes to a landfill.

The students found that plastic straws, paper coffee cups, napkins, plastic food packaging and plastic silverware were the most common contaminants in the recycling bins.

“The waste stream was contaminated to the point where something needed to be done”, Shaw said.

“It was interesting to create art that is not just artful but is also functional,” Best said. “It’s art that’s answering a challenge.”

The collaborative works that began with a class project are being displayed at three waste bin locations at Union South.

This project also includes campaign-specific stickers near various Union South points-of-sale indicating the proper bin for each disposable item, such as straws at Prairie Fire, which have a sticker on the storage container indicating straws should be placed in trash bins.

Some of the goals of the project include reducing overall contamination of waste streams at Union South, increasing composting practices, and encouraging Union South customers to sort waste among the building’s trash, recycling and compost bins.

Shortly before installation, the Office of Sustainability convened a team of UW-Madison undergraduate and graduate students to conduct two audits to determine pre-implementation waste stream contamination levels. Two additional audits will take place post-installation to determine the effectiveness of the public information campaign.

“The university’s support really came through for this student-run project,” Marquardt said. “This project is the Wisconsin Idea in action.”