Ukulele 101: All About the Instrument that Inspires Us to Keep Smiling 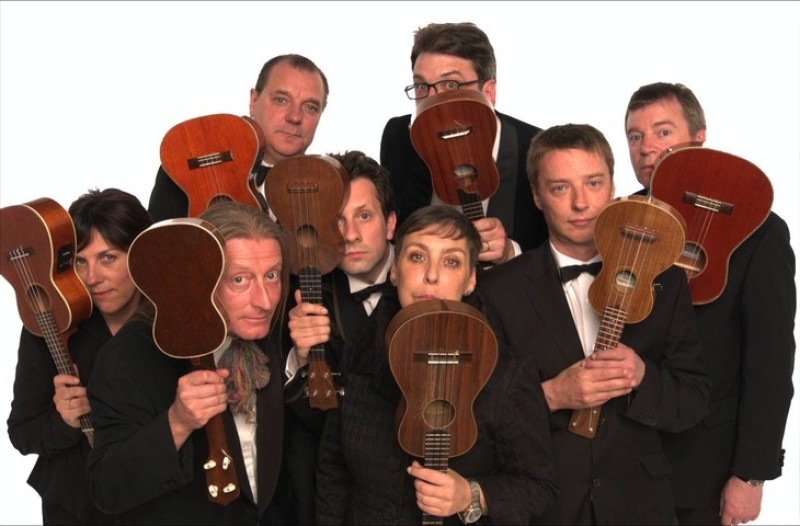 Ready to celebrate spring with a fun event sure to bring a smile to your face? Look no further than the Wisconsin Union Theater, which will present George Hinchliffe’s Ukulele Orchestra of Great Britain on March 31. Mark your calendars for this unique, upbeat and hilarious performance that will have you tappin’, laughin’ and even dancin’ to its impossibly rich performance using only pluckers.

The Orchestra’s mission has centered around fun, for both its members and its audience, ever since its founding in 1985 by George Hinchliffe and Kitty Lux. Hinchliffe says that the all-ukulele orchestra began “as a bit of fun,” remixing well-known songs on “bonsai guitars” and showing audiences that music does not have to take itself so seriously.

As an original type of ensemble, the Orchestra enjoys flexibility in its repertoire and the way that it plays its songs.

In explaining why he and Lux chose the ukulele as their founding instrument, Hinchliffe said, “It allows us to do things that are both entertaining and creative without having to meet the technical requirements of being virtuoso classical players or image-conscious pop musicians.”

As a result, the Orchestra alters genres and arranges mashups that create brand new listening experiences for audience members of songs they may have heard countless times before.

So where did the sensational ukulele lift off from? One sunny afternoon in 1879, a Portuguese ship docked at the Hawaiian Islands, stuffed with Portuguese immigrants. Passenger Joao Fernandez leapt off the ship and began strumming a machete, which is a small, string instrument.

Hawaiian spectators were instantly hooked on the tiny, charming instrument. The Hawaiian Gazette ran the pleasant news: “…Madeira Islanders recently arrived here have been delighting the people with nightly street concerts. The musicians are fine performers on their strange instruments, which are a kind of cross between a guitar and a banjo but which produce very sweet music in the hands of the Portuguese minstrels.”

Spectators, unfamiliar with the fretted instrument, began to mention “oo-ku-lay-lay,” which translates to jumping fleas. The word illustrated Fernandez’s speedy fingers, hence: ukulele. Unlike expensive violins and guitars, the ukulele does not depend on special tone wood or metal strings for its brilliance. With a light, portable body and tablature that guides your fingers, it’s not hard to fall for the uke. Even its shape can be manipulated; take, for example, the pineapple ukulele.

The ukulele has endured a twisty road to fame. The mini guitar was first introduced to mainland USA at the 1915 Panama Pacific International Exposition, where Hawaiian hula dancers and musicians performed alongside 17 million attendees. The ukulele’s charming tone instantly became the sound of tropical exoticism.

In 1990, Israel “IZ” Kamakawiwo’ole released a tropical reggae-style arrangement of “Somewhere Over the Rainbow/What a Wonderful World.” This alluring recording continues to hold the public’s eye as a symbol of ukulele folk music within pop culture, as the late IZ intended.

Meanwhile, George Hinchliffe’s Ukulele Orchestra of Great Britain was picking up steam all over Europe.

Hinchliffe explained, “We yearned for a gig in which people simply play the music, and [the ukulele] is open to all. The audience goes home and thinks, ‘I could do that.’”

As it turns out, music doesn’t have to be serious all the time; sometimes listening to “a bit of fun” can act as a sort of medicine to brighten our days and make us feel more connected to one another. Even when the onset of the COVID-19 pandemic kept us all inside for months, the Ukulele Orchestra maintained its commitment to fun and produced a “Ukulele Lockdown” series on YouTube made up of music videos and “playalongs” with just as much positive energy as its in-person performances.

Throughout the past 37 years, the Orchestra has released more than 30 successful albums and has performed thousands of sold-out concerts all over the world, including in renowned establishments such as Royal Albert Hall and Carnegie Hall. Without a doubt, George Hinchliffe’s Ukulele Orchestra of Great Britain can be at least partly credited for the ukulele’s growth in popularity. Come see why for yourself!