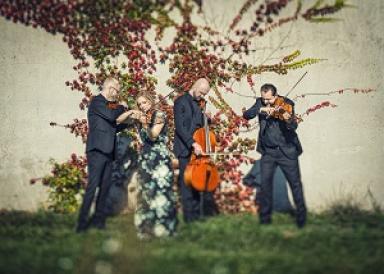 When the Meccore String Quartet performs virtually for the Wisconsin Union Theater on Feb. 28, it will not only bring years of exceptional musical and performing experience but also a long list of accolades and international recognitions. The Quartet has earned recognition and awards from many groups and publications throughout its history for its live performances and recordings. Let’s take a look at just a few of the Quartet’s accomplishments.

One of the Quartet’s most memorable television performances was for arts and culture-focused TV channel TVP Kultura in Poland in 2010. The Meccore Quartet performed Franz Shubert’s “Death and the Maiden” on this channel, and its exceptional performance earned the ensemble a nomination for the prestigious Gwarancje Kultury Award (“guarantee of culture”) in 2011. Each year, TVP Kultura awards this recognition to those who provide excellent cultural arts experiences. Meccore’s nomination highlights its role as a great contributor to the arts community along with its exceptional musical talent. You can enjoy the Quartet’s Gwarancje Kultury Award-nominated performance here:

Also, in 2011, the group received a nomination for the Paszport Polityki Award. The Polish magazine “Polityki” gives this award to leaders in literature, film, theater, classical music, popular music and visual arts. The Meccore Quartet earned this nomination in the classical music category for its “innovative approach to the music and for breaking the musical stereotypes.” This nomination also recognized the many international distinctions the Quartet received before the group’s nomination. The Quartet won 1st prize at the 2010 International Chamber Music Competition as well as the 1st prize of the 2010 Max Reger International Chamber Music Competition.

The Quartet also received recognition for its recorded albums. The group’s 2018 album “Tschaikowsky: String Quartets,” featuring Isabel Charisius and Valentin Erben of the legendary Alban Berg Quartet, received the Pizzicato Supersonic Award for excellence in classical music. Check out a performance of one of the Quartet’s pieces from the award-winning album.

The Meccore Quartet has added many more awards and accomplishments throughout its 14 years as a group. We are excited to present this internationally recognized ensemble to perform virtually for the Wisconsin Union Theater on February 28. The ensemble will perform String Quartet No. 21 in D major, K. 575 by Wolfgang Amadeus Mozart; String Quartet No. 3 by Krzysztof Penderecki; and String Quartet in A minor, Op. 132 by Ludwig van Beethoven. Click here to purchase a ticket to this performance.