An Experience of Honesty, Vulnerability, and Black Art at the 2022 Black Arts Matter Festival 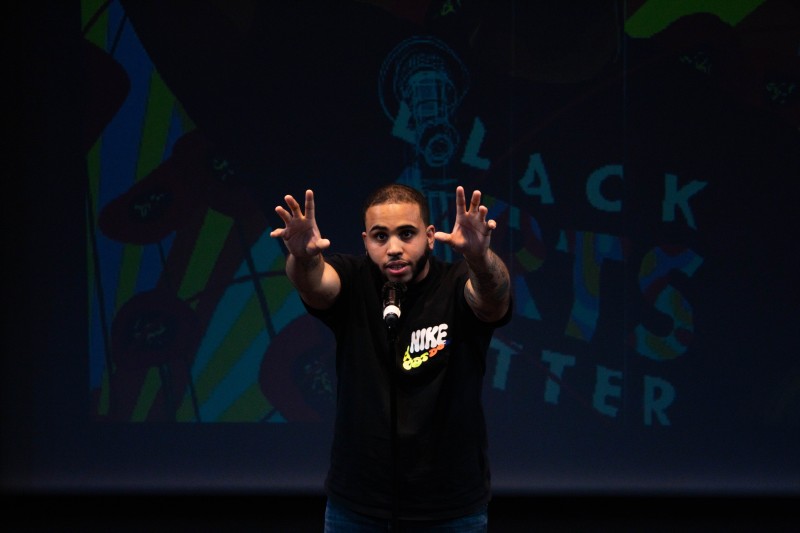 A Black Arts Matter (BAM) Festival to remember filled Memorial Union with art, storytelling, and energy from March 23 to 26.

During each day of the celebration of Black art, stage lights shone on issues and stories portrayed through music, theater, dance, poetry, and comedy.

The Wisconsin Union Theater team and Shasparay, the festival founder and artistic director, looked forward to these days for many months, planning for an in-person gathering of artists and audience members after a virtual festival the year before. Patrons had the opportunity to attend a poetry slam spoken word competition, a debut of Shasparay’s one-person show “Full of Herself” in an event  called “Body Politics” during which panelists discussed body policing, which Geek Feminism Wiki describes as “informal practice of policing one's physical appearance because it does not conform to social norms or is not deemed appropriate for a particular setting.”

Shasparay invited world-class poets to compete in the poetry slam. The artists told stories that included their experiences of sexual assault, racial inequities, the pressures of parenthood, the discrimination faced by people in fat bodies, bullying, masculinity, religious hypocrisy, and much more.

Sharing more than stories, the poetry slam artists shared themselves, inviting people into their experiences with vivid, poignant details. They offered looks into their lives generously and seemingly fearlessly.

“They’re sharing their souls with you,” Shasparay said.

And it certainly felt that way. The last evening of slam poetry filled Shannon Hall with supportive audience members, cheering, nodding, and standing up from their seats for the poets’ artistry. The star-studded competition concluded with Maya Writes being named 4th, Ed Mabrey being named 3rd, Yaw Kyeremateng being named 2nd, and Jacob “Black Chakra” Mayberry being named the champion of the 2022 Black Arts Matter Festival Poetry Slam.

In a BAM Festival first, Shasparay named a new honor she would bestow on a slam competition poet: heart of the slam. The title went to Anthony McPherson, a longtime supporter and participant in the Festival, who Shasparay said unwaveringly cheered on fellow poets.

The festival concluded with an abridged version of the premier of Shasparay’s show “Full of Herself” and post-performance discussion.” Shasparay says her piece focuses on the experience of living in a fat body in a fat-phobic society.

She talked about an expanse of heart-wrenching experiences, like first realizing that some people thought being fat meant you couldn’t be beautiful, feeling unworthy in romantic relationships because of her size, the fetishizing of fat bodies, and her insecurities with which she contends. As she performed, audience members nodded and snapped in appreciation and admiration, and some spoke a chorus of yeahs in recognition of shared experiences.

In the poem, she said, “Confession, I got more likes on Facebook for losing 20 pounds than getting a full-ride scholarship.” She continued, “Confession, some of us are dying to fit in. I know the risk, but I still dream of getting these flaws fixed.”

Throughout the piece, Shasparay circled the theme of fat bodies being made the subject of jokes at fat people’s expense.

She said, “We are not the joke. This body is not your punchline.”

As the lights dimmed after her performance, the audience rose in a standing ovation, filling the room with applause. Then, the lights lit the theater space again for “Body Politics” panelists Dr. Sami Schalk, associate professor in the Department of Gender & Women’s Studies at UW-Madison, who served as the moderator; Shasparay; Dana Pellebon, co-executive director of the Dane County Rape Crisis Center; Kelsey O. Daniels, an artist and advocate; Ciara Hart, dancer and educator of hip-hop dance at non-profit dance studio KLJ Movement; and K McClendon, a Hamline University graduate and poet.

In this raw, unfiltered discussion, they each volunteered their experiences and observations, laying bare the changes they believe need to occur in how the world treats fat people as well as the discrimination they’ve faced living in larger bodies, including fatphobia by medical professionals that had dangerous consequences for them as patients.

K McClendon described a conversation with a colleague in which they shared that they loved being fat. Their coworker expressed doubt about their love for their fat body.

“And the fact that y’all really believe that fat people are so unlovable that they can’t even love themselves, that when a fat person stands in front of you and says, ‘I love myself,’ you don’t believe them. He didn’t believe me.” K said, “He thought in his mind that has to be a lie, because that’s impossible.”

K said they are indeed, then, doing the impossible.

These panelists ended the Festival with a continuation of the honesty and vulnerability patrons experienced throughout the entire festival.

Thank you to the artists and panelists who shared so much of themselves during the festival. We’ve listed the festival artists here. Please take some time to get to know them and the art they bring to the world.

Thank you also to our BAM Festival sponsors for their generous support: National Endowment for the Arts, the Association of Performing Arts Professionals, the Brittingham Wisconsin Trust, the Evjue Foundation, Dane Arts, the Wisconsin Alumni Association, and the Green Bay Packers Foundation. And a big thank you to the patrons who shared in this experience with us. You, our patrons and sponsors, helped make this dream a reality, and your support of these artists and this program means the world to us at the Wisconsin Union Theater.

If you would like to support future efforts like this, please consider making a donation to the André De Shields Fund here. To learn more about this Fund, visit union.wisc.edu/visit/wisconsin-union-theater/the-green-room/new-fund.