The Wisconsin Union Theater’s Concert Series will make its long-awaited return to in-person performances this fall with concerts by six renowned musical acts. The 2021-22 season will mark the 102nd year of the Concert Series, setting it apart as one of the longest-standing music series of its kind in the United States. Most performances will take place in Shannon Hall, located within Memorial Union, while two will take place in the Hamel Music Center through a partnership with the Mead Witter School of Music.

Whether you’re a Wisconsin Union member, guest or student, you can take advantage of these remarkable performances either by purchasing tickets to individual events or by subscribing to the series to ensure you don’t miss out on a single moment. (Note: You may purchase the Concert Series subscription with or without a performance by soprano Renée Fleming). Most performances will include both in-person and livestream viewing options, with the exception of Fleming’s performance, which will be in-person only. 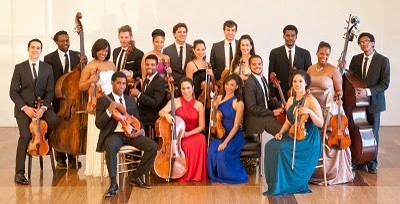 Sphinx Virtuosi, the distinguished and dynamic chamber orchestra, will kick off the Concert Series on Sept. 30 with a 7:30 p.m. performance in Shannon Hall. The group is made up of 18 of the most celebrated Black and Latinx classical soloists who have dedicated themselves to educating audiences about the importance of diversity within the classical music sphere. As of 2014, less than 15 percent of classical musicians in the United States are Black, Indigenous, and People of Color (BIPOC). Sphinx Virtuosi aims to promote representation within classical music while leaving audiences amazed with its powerful sound. To learn more about this performance, click here.

On Dec. 11, renowned violinist Gil Shaham will grace the Shannon Hall stage with pianist Akira Eguchi for a night of moving music. He has been leaving audiences in awe since a young age, debuting with the Jerusalem Symphony and the Israel Philharmonic before the age of 12. Since then, he has won some of the most prestigious awards in music, including a Grammy Award for Best Chamber Music Performance and has recorded more than two dozen concerto and solo albums. More information about his performance can be found here.

Mark your calendars for Jan. 27, 2022, when Third Coast Percussion and Movement Art Is will perform at the Mead Witter Foundation Concert Hall at 7:30 p.m. Founded in 2005, Third Coast Percussion is a Grammy Award-winning percussion ensemble from Chicago. The group aims to inspire and educate their audiences during their performances, emphasizing curiosity, creativity and community within their music. Movement Art Is creates visual artistry with its commitment to change the world, one movement at a time. Learn more here. You certainly will not want to miss the Brentano String Quartet performing live at Shannon Hall on Feb. 10, 2022, at 7:30 p.m. This acclaimed ensemble is celebrating their 30th anniversary and has been the Resident String Quartet at the Yale School of Music since 2014, and audiences and critics alike widely recognize the Quartet for its animated, captivating performances. The Brentano String Quartet has received some of the most reputable awards in classical music, such as the United Kingdom’s Royal Philharmonic Award for Most Outstanding Debut. Learn more about this upcoming unforgettable night of music here.

On March 5, 2022, outstanding trumpet soloist Pacho Flores will perform with the University of Wisconsin-Madison Symphony Orchestra, conducted by Oriol Sans, at the Hamel Music Center at 7:30 p.m. Pacho learned to master the trumpet at a young age through Venezuela’s El Sistema program, which combines musical education with a commitment to social change. Flores brings his own vibrant style to traditional pieces, creating a sound that is uniquely his. His concert with the UW-Madison Symphony Orchestra will certainly be a night to remember. For more information or to buy your tickets today, click here.

Legendary soprano Renée Fleming will bring her musical passion and prowess to Shannon Hall on April 30, 2022, at 7 p.m. She has received some of the highest honors for musicians, including four Grammy Awards and the National Medal of Arts and has been called “possibly the most beautiful soprano voice in the world,” which perfectly sums up her unbelievably beautiful singing. Prepare to be awestruck by Fleming’s in-person performance, and learn about how to receive first access to recital tickets here.

All of us, at the Wisconsin Union, cannot wait to welcome these esteemed performers and you, our wonderful members and guests, into our concert halls once more. If you’re anything like us, we know you’re on the edge of your seat with excitement for these upcoming performances. You can purchase a Concert Series subscription now! Single tickets for the Concert Series, with the exception of Fleming’s recital, are available starting Aug. 24. Tickets for Fleming’s recital, if still available, will be made available in early 2022.

Trust us, you won’t want to miss this sensational lineup.

For more information on the 2021-22 Concert Series or to buy a series subscription, click here.