The Wisconsin Union and the University of Wisconsin-Madison (UW-Madison) class of 1963 ask for the public’s help in collecting the names of fallen servicemen and servicewomen who attended UW-Madison. These names will become part of an interactive, electronic 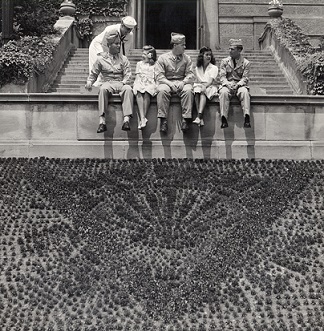 display called the Gold Star Honor Roll, which will honor these heroes at Memorial Union.

The Wisconsin Union unveiled the original Gold Star Honor Roll at Memorial Union in 1928. The original memorial consists of four wooden planks that listed UW-Madison students and alumni who died in the Civil War, the Spanish-American War and World War I (WWI). The planks are located in each corner of the lobby outside of the Main Lounge.

Almost a century later, the class of 1963, in honor of its 50th reunion, committed a generous gift to complement the original memorial with the Gold Star Honor Roll interactive display, which will include UW-Madison students and alumni who died in all wars. The Wisconsin Union is partnering with the class of 1963 on this project.

Project partners are asking for UW-Madison alumni’s and community members’ assistance in collecting the names of fallen UW-Madison heroes for the Honor Roll. To be included in the project, they must have attended UW-Madison and have died during active duty. The service members do not have to be graduates of UW-Madison.

“We will use technology to create a meaningful, compelling experience that tells the stories of our fallen service members,” said Lois Bergerson, Wisconsin Union Gold Star Honor Roll project manager.

Bergerson expects the display will debut in late 2017 in the Main Lounge lobby at the Memorial Union – 99 years after the signing of the Armistice that ended WWI.

“This is the continuation of an important legacy for the Wisconsin Union,” said Wisconsin Union Director Mark Guthier. “We appreciate our community’s assistance in helping us remember those who have given their lives serving our nation.”

For more information about the project or to add fallen heroes’ names to the display, visit union.wisc.edu/goldstar.