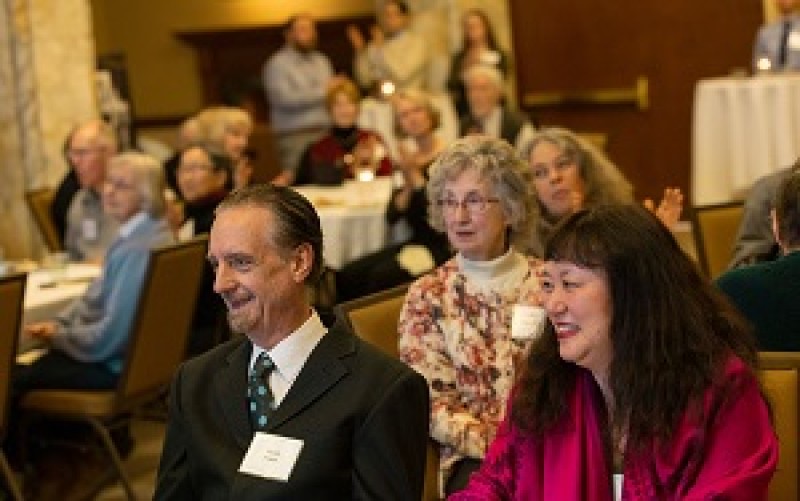 The Performing Arts Committee curated the series with artistic advisors and celebrated musicians Wu Han and David Finckel and unveiled the following lineup:

More than 80 friends of the Concert Series attended the unveiling, clapping and expressing awe as student leaders announced each spectacular concert. The University of Wisconsin-Madison students also shared details about the Series 100-year tradition of bringing chamber music to Madison, Wis.

“Throughout this concert series’ history, we have brought in high caliber musicians to our performing space, including artists such as Yo-Yo Ma, Isaac Stern, Arthur Rubinstein and Dawn Upshaw, just to name a few,” 2018-19 Concert Series Associate Director Adalia Hernandez Abrego said. “This concert series is one of the longest running classical music concert series in the Midwest. It began before the Memorial Union was built.”

Indeed, the series predates the Wisconsin Union’s first building, Memorial Union, which opened in 1928. And the unveiling event allowed all those present to pause for a time to celebrate that 100-year-old dedication to classical music and to acknowledge the importance of the arts at UW-Madison.

During the unveiling event, Wisconsin Union Director Mark Guthier spoke about the ways the arts positively impact the community.

“Certainly, here at the Union, the arts entertain, they inspire, they educate,” Guthier said. “But, in a very special way, they bring people together, which is at the heart of what the Wisconsin Union is all about. A community center of campus.”

He also acknowledged the critical role WUD student leaders play in the series, a role they have played from the very beginning.

“Students helped define the series, select the series, worked with the theater director to produce the series,” Guthier said. “That’s what makes the experience at the Union Theater different than any other place in Madison.”

Subscriptions to this iconic classical music series are currently available for purchase. Subscribers’ benefits include access to the best seats, 20 percent off the price of single tickets, no order fees, a free ticket to Wu Han’s performance with the UW Symphony Orchestra, and the opportunity to be the first to purchase tickets to Renée Fleming’s 100th anniversary gala concert.

Click here for more information about the series and the artists, including how to purchase a series subscription.

If you would like to make a donation to support arts opportunities like these, please visit union.wisc.edu/donate, or contact Wisconsin Union Annual Gifts Manager Dan Plummer at (608) 890-1997 or dplummer@wisc.edu.