The Wisconsin Union Directorate (WUD) Music and Film Committees have released the full lineup of Terrace After Dark, an iconic series of free live music and film showings at the Memorial Union Terrace.

The summer-long program kicks into full gear this weekend, with music booked by the WUD Music Committee and Lakeside Cinema, the WUD Film Committee’s free film series. WUD Film’s programming kicks off on Monday, May 28 at 9 p.m. with the highly acclaimed “Black Panther”. The Committee will show films with memorable soundtracks every Monday night through Sept. 3 as part of this year’s “Soundtrack for Summer” theme. Lakeside Cinema will also include films on select Sunday evenings around the theme of “Sequel Sundays”. 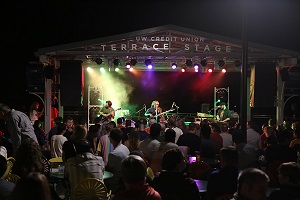 The After Work Series features open mic nights on Wednesdays at 8 p.m., and live bluegrass and Americana music on Thursdays and live jazz on Fridays from 5-7 p.m. The Wilder Deitz Trio kicks off the long weekend at 5 p.m. on May 25.

All of these events and thousands of programs at Memorial Union and Union South are organized, promoted and run by WUD, the Wisconsin Union’s student programming and leadership board. WUD is made up of 10 student-led committees and six Hoofers clubs. These events provide countless hands-on learning experiences for University of Wisconsin-Madison students and experiences for a lifetime for the community.

Purchases made at the Union’s locations, including the Memorial Union Terrace, help support these opportunities and the Union’s low-cost and free programs, such as Terrace After Dark.