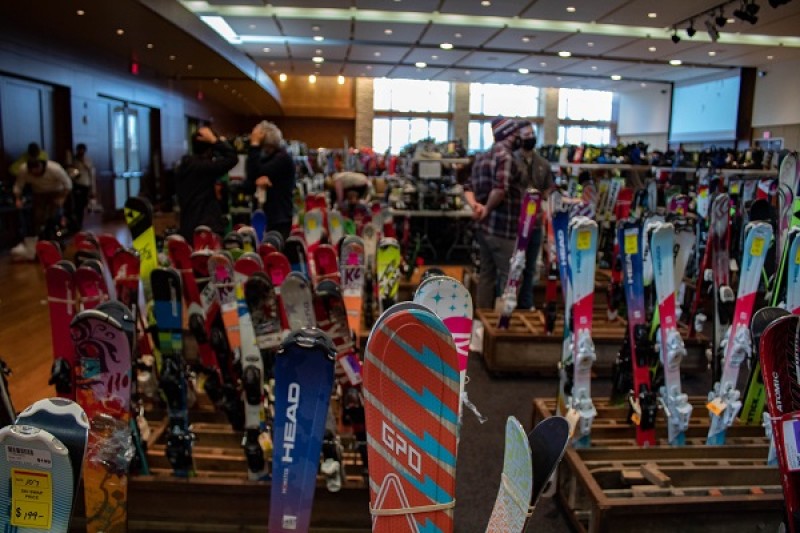 After the resale, on Dec. 5 at Union South, patrons can enjoy a meet and greet with the Hoofer Ski and Snowboard Club at 5 p.m. and a free showing of the film “Teton Gravity Research: Magic Hour” at 6:30 p.m.

This year features many vendors, including Sol Alpine, Fitzharris, Shepherd and Schaller, Lakewood Ski and Sport, Endurance Enterprises, and Wayne’s Ski and Cycle.

Members of the community can also sell their new and gently used outdoor recreation gear at the Hoofer Ski and Snowboard Resale. Each community member can bring up to 10 items to re-sell Dec. 1 from 5-8 p.m. and Dec. 2 from noon-8 p.m. in the Agriculture Room at Union South. Event organizers will review the items for approval and can help with item pricing as well as monitoring the sale of the items.

Revenue raised during the resale will help support the Hoofer Nordic, Alpine and Freestyle Ski Teams as well as the Hoofer Ski and Snowboard Club.

Following the meet and greet, the Club and the Wisconsin Union Directorate (WUD) Film Committee will host a showing of the skiing and snowboarding documentary, “Teton Gravity Research: Magic Hour” on Dec. 5 at 6:30 p.m.

The film documents renowned skiers and snowboarders as they shred snow throughout North America. The footage often puts viewers in the skis and snowboard bindings of the featured athletes with cameras sharing the skiers’ and snowboarders’ points of view as they stare down thousands of feet of slope. The documentary also gives film-goers a look at some athletes’ stories. Among the 20 featured athletes are Parkin Costain, Kai Jones, Jeremy Jones, and Michelle Parker.

The film is made possible, in part, through support from the Sierra Nevada Brewing Company, YETI, Tincup Whiskey, The North Face, Atomic, Volkl, Mammut, the Jackson Hole Mountain Resort, and The Ski Journal.

These events are part of the Hoofer Ski and Snowboard Club's year-round work to foster a love of the outdoors and promote student leadership opportunities. Club members go on trips to ski resorts in Wisconsin, the western United States and Canada as well as have access to skiing and snowboarding lessons.

Those interested in learning more about the Hoofer Ski and Snowboard Resale, meet and greet, and film showing can visit union.wisc.edu/sns-events.