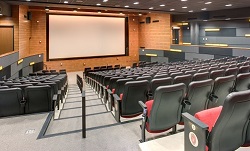 Current events include the following:

The members of WUD’s committees and clubs created their events with the Universal Declaration of Human Rights in mind, which says, "Human rights are rights inherent to all human beings, regardless of race, sex, nationality, ethnicity, language, religion, or any other status. Human rights include the right to life and liberty, freedom from slavery and torture, freedom of opinion and expression, the right to work and education, and many more. Everyone is entitled to these rights, without discrimination."

“We really want to bring campus together and celebrate our universal human rights while also educating those who are unsure about what they are,” Wisconsin Union Vice President of External Relations Alison Hovind said. “We wanted to bring awareness to the official Human Rights Day, which is Dec. 10.”

WUD includes 10 committees and six Wisconsin Hoofers clubs that organize, promote and execute thousands of cultural events and outdoor recreation opportunities each year.

More information about the student leaders’ week of human rights-related events is available at union.wisc.edu/humanrights.