The Wisconsin Union Theater’s fall virtual Concert Series performances will begin on Nov. 7 at 7:30 p.m. CDT with a performance from Paris by Camille Thomas, featuring music by Claude Debussy, Nadia Boulanger, Maurice Ravel and Frédéric Chopin, and a live Q&A with Thomas and pianist Julien Brocal on Nov. 7 at 2 p.m. CDT. 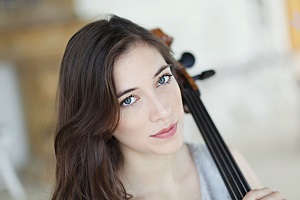 Thomas, a Franco-Belgian cellist, says she uses her music to bring people together from a range of cultures and backgrounds. Thomas released her second album, called “Voice of Hope,” with the exclusive Deutsche Grammophon this past June.

Thomas studied with Frans Helmerson and Wolfgang-Emmanuel Schmidt at the Hochschule für Musik Hanns Eisler in Berlin, Germany, after working with Marcel Bardon and Philippe Muller in Paris and Stephan Forck in Berlin.

Camille plays the Feuermann Stradivarius cello (1730) with a bow by Eugène Sartory, who is regarded as one of the finest bowmakers in history. Joining her for this performance will be pianist Julien Brocal.

“Camille Thomas’s extraordinary talent makes her one of the most captivating artists of our time, as evidenced by being the first cellist in several decades to be signed by the major record label Deutsche Grammophon,” Wisconsin Union Theater Director Elizabeth Snodgrass said. “Her ‘Midnight in Paris’ program brings us closer to her roots and reflects the beauty and charm of her personality as well as her musicality.”

The Camille Thomas performance marks the start of the fall Concert Series events, which includes a concert with Jeremy Denk on Dec. 11. Ticket purchase information as well as Thomas’s performance program can be found here. Tickets for this online event are $10 for UW-Madison students, $18 for Wisconsin Union members, and $20 for all other patrons.

The Wisconsin Union Theater has served as a cultural center for community members and visitors for more than 75 years. The WUD Performing Arts Committee plans many of the Theater’s events, including the Concert Series.

While usually held in-person and most often in Shannon Hall, the Wisconsin Union Theater team decided to hold this fall’s Theater events in a virtual format for the health and safety of patrons, artists, and team members in light of COVID-19. The team aims for all of its spaces, including online ones, to be accessible. Those that need accommodations can reach out to the Wisconsin Union Theater team at wisconsinuniontheater@union.wisc.edu.

The Theater team continues to evaluate what changes may need to occur related to the spring Concert Series events as well as other spring Theater season performances.

The Wisconsin Union Theater has made multiple commitments to take a stand against racial injustice, including being more than allies, being activists; using the arts to create social justice; remembering students are future leaders and must be part of the change; using its voices to influence leadership and being firm in its resolve; and making space, stepping back, and learning how to give up undeserved or unnecessary power and privilege.

For more information about Camille Thomas, including how to purchase tickets, visit union.wisc.edu/events-and-activities/event-calendar/event/camille-thomas.